My AS groups are well into revision now, and what they really want to do is watch me write model answers in the board, over and over and over. Well, I might manage one a lesson- maybe- but I would much rather they revised in an active way that engaged them with the depth and breadth of the subject matter and created evaluative connections that will help them in the exam.

You know that feeling back to school after Easter? Well- so do your learners. The immersion into the final term can be tough and I would argue that we need as practitioners to think hard, and plan well, to engage the disaffected and those nervous about upcoming exams. This activity was a starter- I asked for a volunteer and he then assumed a murder victim posture on the floor. *Much comedy. Another student then drew round him with chalk to get a CSI style outline.

Groups were then asked to assess which of the ‘suspects’ (Sociological theorists) had killed the exam question. By that I meant assess what that theorists would say about the question. They then wrote this on marker cards and placed them on our victim- following which envoy’s from each group decided what order they should go in. The next stage was to write a group work based ‘defence’ which was the evaluation of the original theorist- so for example they wrote about the Marxist CCCs evaluating a Functionalist perspective. This was also reported on cards and placed next to the original theorist. A separate group was writing a case report- which broke down into an introduction and conclusion card. Essentially they were just essay planning in groups- but the focus was on engagement and creating that spark of interest. All the students took notes and some photographs of the crime scene- which they then used in the next task.

I firmly believe that answering past question and taking on board Assessment feedback is the best way to revise. To empower my learners- who are mixed ability I like to give them many opportunities in class to plan individually and collaboratively so that they feel confident in their abilities to undertake productive revision at home. I liked the idea of thinking about the question not being a 2D experience, just like life isn’t. In addition to this I also wanted to remove my mostly humanities based learners from their comfort zone to allow them to engage with revision material in a new way where they could produce an end product, this I hoped would not only a valid way of raising evaluative skills but also as a new/different/fun task would bring on board the learners who had not done enough revision over Easter and needed to feel if they started now they could make a difference to their summer exam grade. Thanks is due to @ICTEvangelist for suggesting the actual 3D shape idea, and also to @nik_d_maths for finding me a net for a 14 sided shape!

The shape it’s self is reflective of the P (Point) E (Evidence) E (Evaluate) format which I teach my classes for exam response. They have to repeat this four times, plus intro and conclusion for an essay style response. If you look at the net of the box you can see there are spaces for is to happen- but some of my class, whom I use SOLO with also began making links across the points and and using the knowledge to think in an abstract way. I need to think more about the shape of the net to encourage this to happen amongst learners of all abilities as it has great potential.

All of my learners managed to fill in the spaces on the net and form a flat essay plan- and only couple didn’t complete making it into a 3D shape. I was pleased that once they had made the boxes the students were keen to use them to make notes, revision cards and mind maps in future lessons.

Whilst this lesson wasn’t perfect- I am aware the boxes were small and a bit fiddly- in terms of engagement it was really successful. I would say all learners were working purposefully and on task for the duration of the lesson. They were able to self differentiate by the theorists that they chose to utilise in the essay plan- however- they were also working to a high level as the activity forced evaluation as a mandatory part of the planning and writing stage. Many learners worked collaboratively during the lesson, and it was a lovely to see my quite grown up learners flushed with pleasure at creating an end product that they were proud of and had value for them. 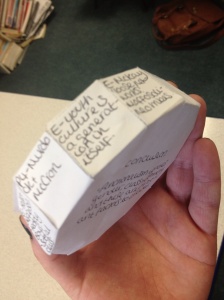 Exam question planning need not be 2D- our learners are certainly not- and by drawing them into an unconventional task they made excellent progress and felt empowered about the own learning and potential.

8 responses to “3D planning and kill the Question”